History of the Rolex Daytona

A timepiece born to race is how Rolex describe their motor racing-inspired chronograph watch. They named it the Cosmograph, but it quickly became known simply as the Daytona by watch lovers around the world.
‍
In this article, we are going to delve into the history of one of the world’s most iconic timepieces, from its unsteady beginning, through the Paul Newman era and its modern-day incarnation.

The early years of the Rolex Daytona 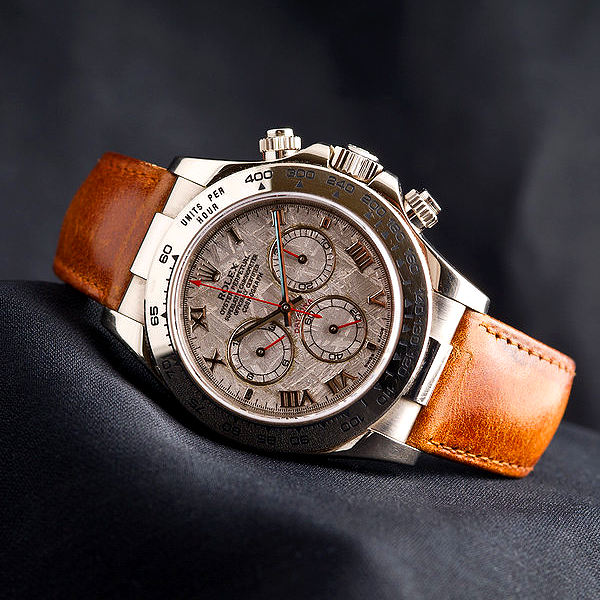 Rolex didn’t really produce much in the way of chronograph watches in the first half of the 20th century, with the company preferring to concentrate on producing three-hand models, whilst leaving chronographs to other watchmakers. During the 1950s they slowly began to dip their toes into the chronograph market with their reference 6234 watches, but even then they would only sell around 500 units each year.
‍
Nevertheless, Rolex watches were well respected by motor racing competitors, which included Sir Malcolm Campbell who held the world land speed record and always wore a Rolex Oyster watch on and off the track.

The Daytona takes off

After receiving positive feedback from racing drivers as to the accuracy of their reference 6234 watch which impressed drivers with its ability to accurately time laps, Rolex decided to up their game when it came to chronograph watches.
‍
In 1963, Rolex released the reference 6239, which revolutionised the sporting watch by adding a tachymeter on the bezel, something that had not been done before. It also featured more striking motor sport-themed styling, with a contrasting dial and sub-dial colouring, and they named it the “Cosmograph”, taking their inspiration from the space-race and the race to the moon.
‍
Sales of the watch rose steadily and having already become the official timekeepers of the Daytona 500 motor race, Rolex decided to give reference 6239 Cosmograph the nickname “Daytona”, and it was a name that would stick.
‍
Paul Newman and Rolex Daytona watches become inexorably linked 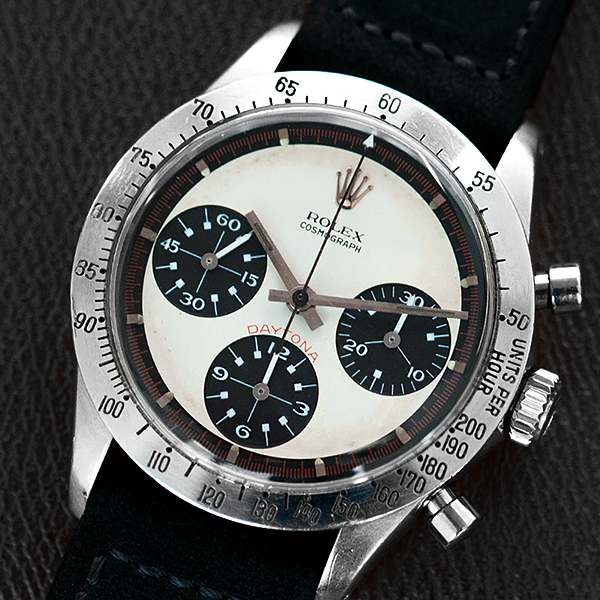 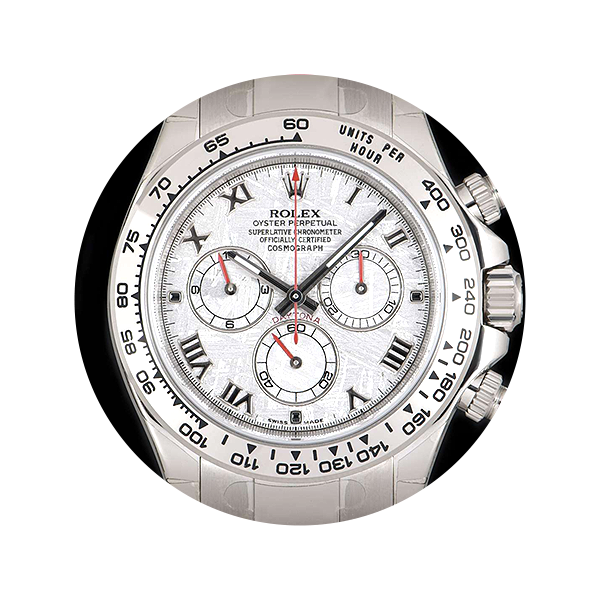 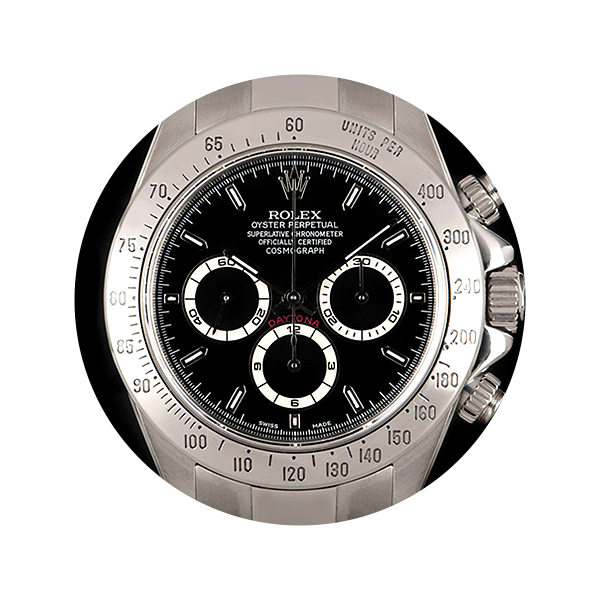 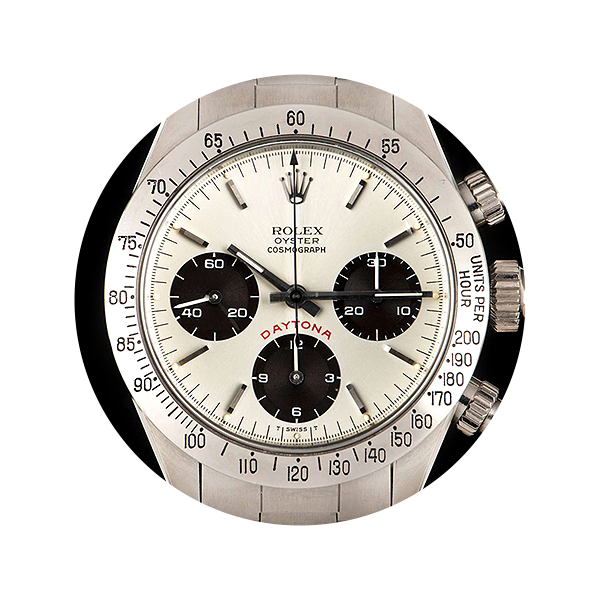 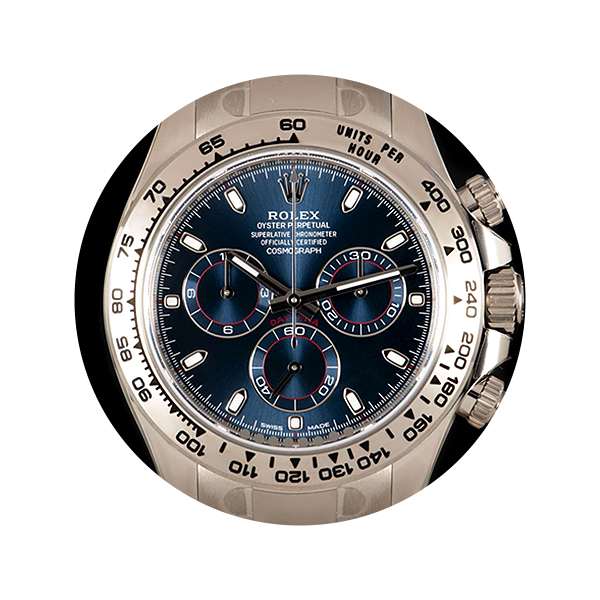 The Rolex Daytona really came to international prominence thanks to two huge movie stars and one hit movie of the 1960s. The film ‘Winning’ starred Paul Newman as a Formula One racing driver named Frank Capua, and his character always wore a Rolex Daytona on and off the track. Newman loved the watch so much that his wife and co-star Joanne Woodward gifted her husband a Rolex Daytona that had a stunning cream dial and black sub-dials.
‍
The film was released in 1969 and was a huge hit, and with the Rolex Daytona watch now being seen by millions of people, worldwide orders rose considerably, especially for the cream and black dialled version. This version of the Rolex Daytona would become inexorably linked with movie star Paul Newman, so much so that collectors began calling it the “Paul Newman Daytona”, a variant that still carries his name to this day. 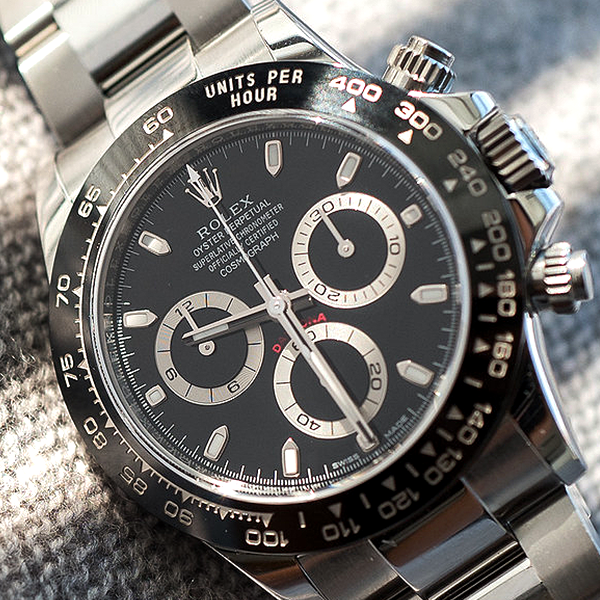 During the late 1960s, self-winding watches had become fashionable amongst watch aficionados and so Rolex ditched their manual winding Valjoux movement and replaced it with the self-winding mechanism from Zenith, who produced their perpetual El Primero movement, with Rolex adding around 40% of their own components to the movement.
‍
This new watch was given the reference number 16520 Daytona, and demand for this watch that also featured a slightly larger case size (up from 37mm to 40 mm) went through the roof, with the waiting time for one of these watches topping three years.
‍
During 1992 Rolex released their first-ever yellow gold Daytona, with a white gold version following in 1997, whilst other minor tweaks followed, including making the dial easier to read in low light, and a platinum edition was launched to coincide with the watches 50th anniversary in 2013.

Furthermore, historic and iconic, the Daytona 16520 remains the last Rolex timepiece not to be fully manufactured under their own umbrella. Designed to meet the demands of professional motorsport, its durability, luxuriousness and high-performance make it one of the most collectable watches in the company’s illustrious history. Guaranteed to set pulses racing amongst aficionados, it was powered by the Zenith automatic chronograph movement with the extensively modified calibre 4030 based on Zenith’s El Primero 400.
‍
Renowned for their dedication to precision and being truly independent, the evolution of the Daytona subtlety (and time) stood still. It took Rolex until the new millennium to unveil the new and first in-house Daytona model.
‍
The calibre 4130 features a “vertical clutch” chronograph coupling mechanism and dramatic 60% reduction in parts to its predecessor, helping to enhance the internal structure and functions of the movement, as well as increase the power reserve from 50 to 72 hours.
‍
So, what of the latest arrival? Released in 2016, the Daytona 116500LN is a modern classic that transcends the elegant look of past Daytonas. The stylish black ceramic bezel offers a touch of swagger and is fuelled by the imperious automatic calibre 4130 that boasts Rolex’s own accreditation.

From its humble start as a timekeeper for racing drivers to a symbol of style for one of the world's most famous actors, the Rolex Daytona optimises style and practicality, and it is sure to evolve during the 21st century.