The History of the Rolex Kermit

Rolex have been making watches of distinction for decades, and one of their most famous and long-lived watches has been the Rolex Submariner, a watch that was launched as far back as 1953. The Submariner saw a number of changes since its inauguration nearly 70 years ago, and none more so than the version with a green bezel that became affectionately known as ‘The Kermit.’ In this article, we will take a closer look at the history of this famous watch as well as covering everything there is to know about the Kermit watch.

The History of the Rolex Kermit

Rolex have been making watches of distinction for decades, and one of their most famous and long-lived watches has been the Rolex Submariner, a watch that was launched as far back as 1953. The Submariner saw a number of changes since its inauguration nearly 70 years ago, and none more so than the version with a green bezel that became affectionately known as ‘The Kermit.’
‍
In this article, we will take a closer look at the history of this famous watch as well as covering everything there is to know about the Kermit watch.

A Brief History Of The Submariner 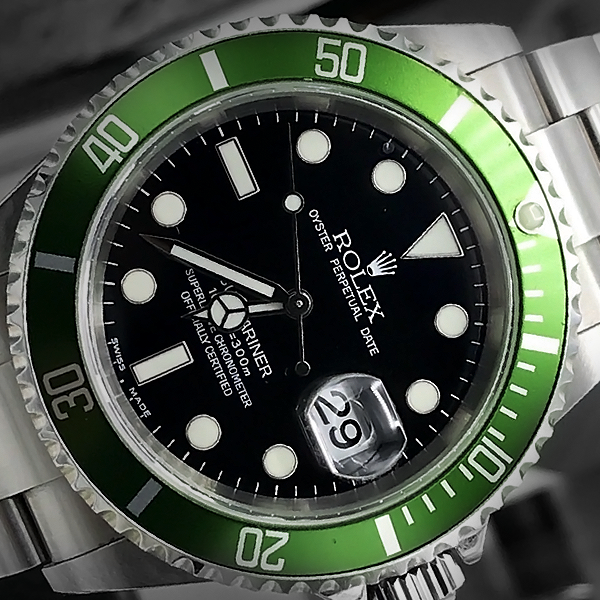 Launched in 1953, the Submariner was typically designed for and became popular with divers due to its ability to withstand the pressures of water at depths of up to 300 metres. Its popularity grew even further when a certain Mr Sean Connery was seen wearing an early Submariner in his first four James Bond films. Eventually, the watch became more of a status symbol as its popularity increased, and now it has surpassed its use as a functional timepiece for divers and has become one of the most coveted watches around. 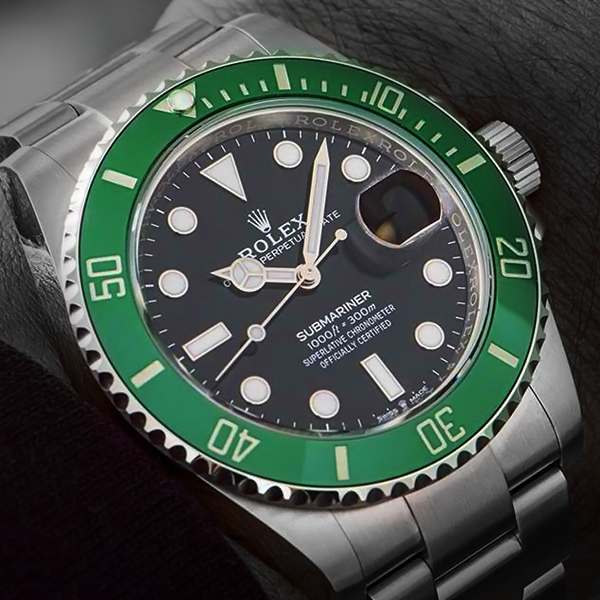 It is safe to say that the initial reaction to Rolex releasing a watch with such a striking green-coloured bezel was mixed. However, green has been a staple colour in Rolex watches advertisements for decades and green is often seen as a colour that bestows good luck and fortune, so it was only natural they would at some point release a green-coloured watch. Nevertheless, some critics saw this as a departure from the norm, and that it was a novelty item that did not uphold the sophisticated look and feel that had become synonymous with a luxury watchmaker like Rolex. Needless to say, the Rolex Kermit has now become one of those rare Rolex watches that has gained almost legendary status, often commanding huge sums of money for the earliest models.
‍
Despite the criticism, it appears as though the people in charge at Rolex knew exactly what they were doing, and launching a green watch on what was the 50th anniversary of the Submariner model proved to be an excellent marketing move. With Rolex aficionados often coming up with nicknames for their watches like the Smurf, the Batman and the Rolex Hulk, it came as no surprise when the watch became known as the ‘Kermit’ after the green frog from the television show ‘The Muppets’ which was popular at the time. 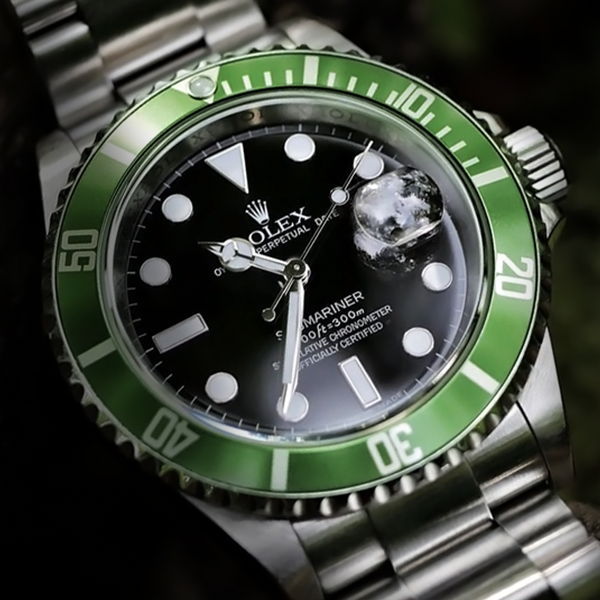 Even those people who were initially shocked by the green-coloured bezel would have to concede this was still a stunningly beautiful watch. The combination of the green bezel, black dial and stainless-steel strap and clasp makes it utterly unique, as is the dial, which was bespoke to this version of the 16610 range. The index at 12 o’clock, as well as the indices individual plots, are all larger on the Rolex Kermit Submariner as opposed to other watches in the 16610 range.
‍
On the Y serial what was the serial number used for 2002/2003 and the F serial dated in 2003 watches. The F serials offered a rare statement green bezel was manufactured with a Flat 4/Fat 4 font. There were also very rare small productions of this watch made on Y serials, those were the very first batch of the Kermit. After 2003 the font changed to a thinner sharper topped font which was used for the rest of its production. 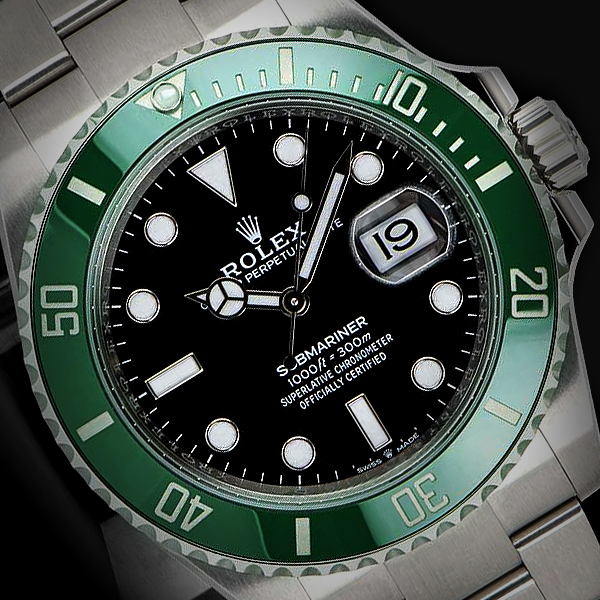 As is typical with most Rolex watches, the Submariner Kermit makes use of the Caliber 3135 automatic movement, which is still one of the oldest movements currently in production and is made totally in-house by Rolex.
‍
The movement is totally reliable and has easily become the most popular due to its ability to maintain perfect accuracy and does not falter through the years. It uses 31 jewels that produce 28,800 beats each hour and offers up to 50 hours of reserve power, plus it is also waterproof to a depth of 300 metres.

How It Feels On The Wrist 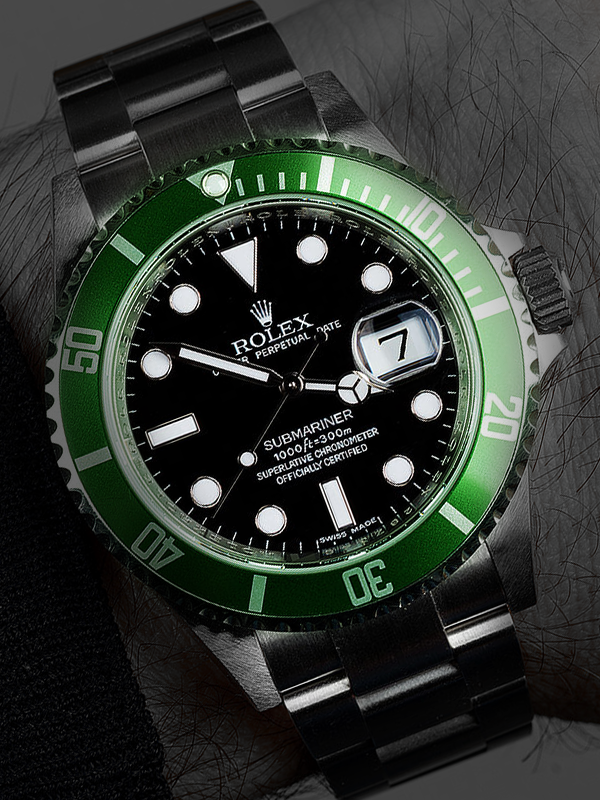 When it comes to how it looks and feels on the wrist, the Rolex Kermit is up there with the best watches of its era, as this is a watch that oozes power and charisma. Rolex have undoubtedly put a lot of thought into how this watch feels when wearing it, and with a 16cm circumference and being just 13mm thick, it can be worn on smaller wrists (as small as 13.5cm) just as comfortably as on larger ones. Another advantage of it only being 13mm thick and its sloping bezel is that it will slide under even tight sleeves easily, making this one of the most comfortable watches around.

Designed with the ability to handle the high pressures that come with diving to depths of up to 300 metres whilst still maintaining its waterproof integrity, the Rolex Kermit also has a rotating bezel that helps divers stay on track with the time spent underwater. This undoubtedly helped many divers avoid getting into difficulties whilst underwater for long periods. But this watch is more than just a functional timepiece; this watch, when released by Rolex, became a statement that the company wasn’t going to shy away from releasing a model that was out of the ordinary. And most watch fanatics would say that’s a good thing.