The history of Vacheron Constantin watches is one of the most elaborate in watch making – expanding over 250 years and in the process cementing their legacy in horology. 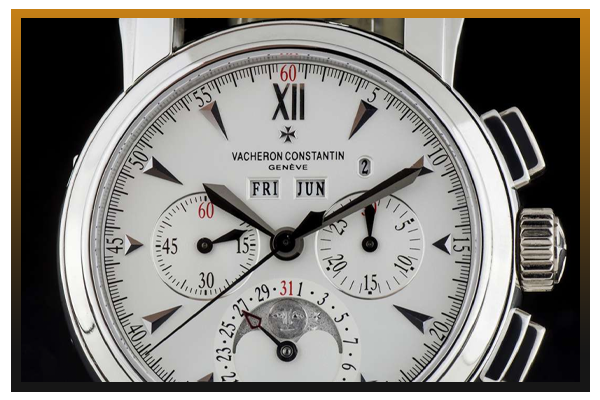 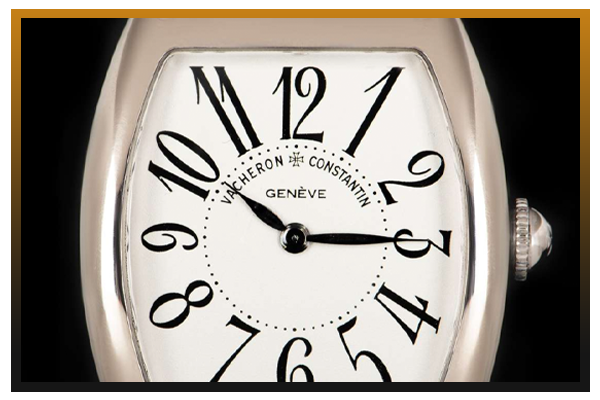 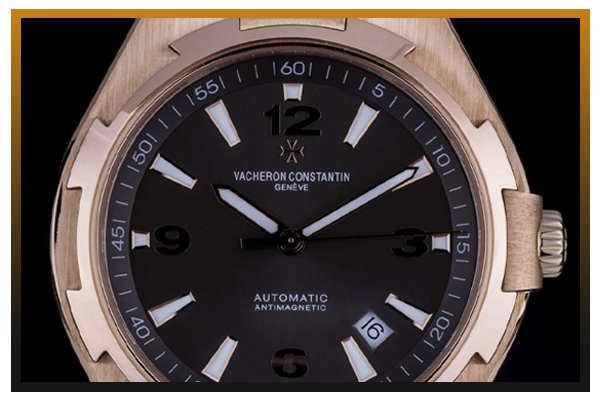 The earliest timepiece can be traced to 1755 upon the release of a unique silver pocket-watch inscribed with ‘J: M: Vacheron A GENEVE’ on the movement.

It would be in 1785 that his son Abraham Vacheron took over the family workshops against the backdrop of the upcoming French Revolution. Against all odds, Vacheron charged through these troubling times and, following his father’s footsteps, began to train his son Jacques Barthélémi Vacheron who in turn began to expand the company to higher levels in 1810. His portfolio grew to an exclusive client base including Prince Charles-Albert of Carignano, soon King of Sardinia.

In 1819 Jacques Barthelemi Vacheron created a partnership with Francois Constantin, a seasoned businessman in order to combine the company to become Vacheron Constantin. In turn, they created their company motto ‘Do better if possible and that is always possible’ which was taken from a letter Constantin had written to his new partner Vacheron. It was clear from the beginning of this partnership that the company was destined for greatness.Continuing their on-going expansion, Vacheron Constantin began their first collaboration with the United States of America and in 1832 Vacheron Constantin appointed John Magnin as their first sales representative in New York City.

The high demand called for the expansion of the company rapidly. Jacques-Elysee Goss, the leading Geneva’s architect of the Grand Theatre opera house, was chosen to design the new building in 1875 which was situated on its own island; today it is now a historical part of Geneva with a boutique and the Heritage Department. In 1880, the Maltese cross logo was chosen from it was time to create a motif symbolic of the company’s history and desire for precision in timekeeping.

Therefore, it is only fitting that in 2004 Vacheron Constantin opened one of the most innovative headquarters and manufacturing factory in Plan-les-Ouates. Designed by Franco-Swiss architect Bernard Tschumi, the building is shaped like the Maltese cross in half, symbolic of the extensive history and the company’s success for the future.

Vacheron Constantin’s special vocation has been to produce custom-built watches, with its master watchmakers to specific designs of what the client needs. The company have endeavoured to create one-off pieces for the avid timepiece collectors and therefore it is only fitting for the company to provide a distinctive one-to-one service that allows the buyer to craft their own unique Vacheron Constantin timepiece; an ‘Atelier Cabinotiers Special Order’.

Having celebrated their 250th birthday in 2005, Vacheron Constantin has been one of the most revolutionary horologists and have been rightly recognised for it through their extensive accolades. When purchasing a Vacheron Constantin timepiece, you are not just gaining an incredible luxury product, you are a part of an exclusive history that spans centuries and a company that is constantly setting the mark for everyone else.

One of the first known complicated movements of Vacheron Constantin dates to 1790 and powered a wall-clock with a then rare calendar showing the days and date in the turn of the Century following the French Revolution.

Over the years, Vacheron Constantin’s movements became more elaborate, keeping up with the new advances of the times. In 1824, the jumping-hours watch became a key turning point in the company’s technical advances with a cylinder escapement and a three armed monometallic balance, set in a red gold case. In addition, they produced an extravagant timepiece, demonstrating Vacheron Constantin’s key eye for detail. This watch displayed blue champlevé enamel fashioned in the map of Italy, set with Arabic numerals and two tone dial in a stunning yellow gold.

The perpetual calendar is one of the most complicated movements to achieve in watchmaking and it was in 1884 that Vacheron Constantin accomplished this in a yellow gold double-faced pocket-watch – an incredible feat when one considers that a perpetual calendar automatically calculates different months and leap years. This pocket watch in particular calculated a 48 month calendar with dates, days, phases and even the age of the moon.

1889 marked the start of Vacheron Constantin’s collection of ladies wristwatches. One of the first was a stunning wristwatch set with diamonds and the ‘unbalanced look’ of the crown was replaced with a device in the bezel that would instead change the time.

The first Royal Chronometer was released in 1907 and was Vacheron Constantin’s first timepiece to have its name registered. This original pocket-watch that would form the basis of future collections was renowned for its toughness, reliability and accuracy and would continue to be adapted as technology advances. 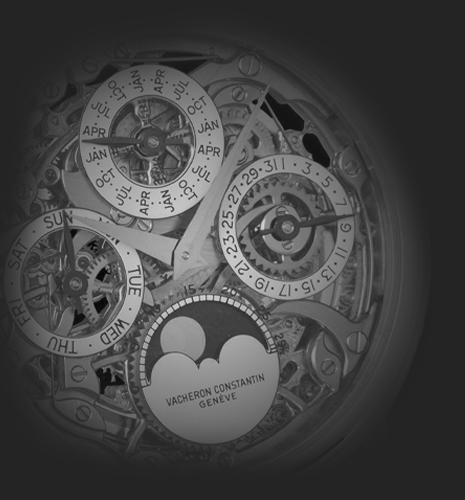 One of the most distinctive design Vacheron Constantin debuted was the ‘tonneau’ or barrel-shaped case in 1912 which would form part of the brand’s identity. The elegant design was popular with both men and women and housed some of the most complicated movements in watchkeeping. Today, this style case is most seen in the ‘Malte’ collection.

Vacheron Constantin are constantly on the search for perfection, constantly striving to better themselves and creating incredibly unique timepieces for the ages. It’s no wonder they patiently spent five year creating a one-of-a-kind watch for King Farouk, son of King Fuad I of Egypt in 1935. This was gifted by the Geneva authorities and was created with 14 complications in 820 parts, of which 55 were jewel bearing.

The ultra-thin wrist watch was created in 1955 and enclosed with the calibre 1003 with the hallmark of Geneva, and at the time was the thinnest manual wound movement measuring in at 1.64mm. Similarly, the ultra-thin self-winding movement calibre in 1120 released Fine 1968 model.

Reminiscent of Vacheron Constantin’s patience with King Farouk’s watch, the ‘Kallista’ watch, Greek for ‘most beautiful’, was finally completed in 1979 after five years due to the matching emerald cut diamonds and took over 6,000 hours of labour to create. The 118 diamonds weighed over 130 carats and the watch was carved from one-kilo gold ingot.

The ‘Overseas’ collection debuted in 1996 and as the name suggests, was inspired by travelling as noted in the design of the watch with its clear cut lines and rounded case. 1999 saw a chronograph version introduced with self-winding movement and 2004 heralded in an antimagnetic screen to give the watch protection during sports.

In 1839 Vacheron Constantin’s dedication paid off when the founders along with G-A Leschot were awarded the coveted Rive Prize’s gold medal for ‘the discovery of the most value to the Genevese industry’. With the ever-growing expansion of the watch industry, Vacheron Constantin continued to set the bar which was cemented when they won distinctions at the first chronometry competitions at Geneva Observatory.

Created in 1886, the hallmark was created to preserve the talent of Geneva’s watchmakers and is still considered a mark of quality, accuracy and endurance in horology. It is only fitting that Vacheron Constantin today remain the oldest watchmaking company to be awarded the Hallmark of Geneva. In keeping with Vacheron Constantin’s accolades, the company were given the opportunity to present a collection of timepieces at the Milan Internation Exhibition in 1906. One of the highlights of the range was a stunning pocket-watch encrusted with cloisonné enamels and a two-tone silver dial with an engine-turned centre – perfect for the fashion of the period.It comes as no surprise that Vacheron Constantin began to receive orders from royalty such as Prince Napoleon, Queen Mary of Rumania and even given the Royal Order of St Sava – becoming a purveyor of the Serbian Royal household.

Vacheron Constantin once again set records when they were awarded the most coveted Diplome du Prestige de la France in June 1972 by Francois-Xavier Ortoli – becoming the watchmaking company to do so. Thus the ‘1972’ watch, an asymmetrical case and oval movement, was released to commemorate the achievement. In keeping with the company’s accomplishments, Vacheron Constantin celebrated their 222nd birthday in 1977 with the launch of a monobloc case with screw held bezel to ensure its durability in different climates. The ‘222’ inspired the ‘Overseas’ model, demonstrating the company’s constant development with the changing times.

2005 was the year to celebrate Vacheron Constantin’s incredible 250th anniversary. For such an important milestone, it was only fitting that the company released five special collections to mark the year. Notable timepieces were the one-of-a-kind L’Esprit des Cabinotiers, a pink-gold sphere that opened to unveil an extremely complicated watch, and the Tour de L’ile of which only seven were ever made. It consisted of 16 complications, 834 parts in the movement, took 10,000 hours of research and creation from a range of different departments at Vacheron Constantin. The pieces were truly symbolic of the innovation and dedication the company are recognised for.