Menu
Home » The History of The Rolex Hulk
Watch Brands

The History Of The Rolex Hulk

The Rolex Submariner Hulk made its first appearance back in 2010 and was met with worldwide interest from the start. It will come as no surprise that it sported brilliant aesthetics, top-class functionality, and great wearability - all of the reasons why unworn Rolex watches and second-hand Rolex watches are so desired. There are no two ways about it, the Rolex Submariner Hulk is a modern classic. Collectors, timepiece enthusiasts, and those who aspire to own a Rolex watch have fallen in love with it.

The Connection Between Hulk & Kermit

The 2003 release of the Rolex Submariner 16610LV (Kermit) celebrated 50 years of the Rolex Submariner watch. It was the same as the 16610 (black-bezel Rolex Submariner) that had been around for years, and was a classic, but for its green bezel, hence the name 'Kermit'.
‍
It gave the Submariner a fresh look. Green, being synonymous with Rolex since the mid 20th Century, had become the Rolex colour. Initially, people weren't sure but soon came around to the idea, seeing the historical connection between the company and the colour. In between 2003 and 2010 there were tiny changes and additions, like changes in the font for the number 4, prompting a slight rename for those particular watches (Kermit "Flat 4") and in 2007 Rolex added an engraved rehaut reading "RolexRolexRolexRolex".

Then, in 2010 'The Kermit' was discontinued and out of its ashes evolved 'The Hulk'.
Living up to its name, 'The Hulk' was greener - with the colour more prominent and featuring on the bezel and the dial. The material used was Cerachrom (ceramic), making it more scratch and corrosion resistant and the case was given a makeover with wider lugs and crown guards, giving 'The Hulk' a more substantial and distinctive look. 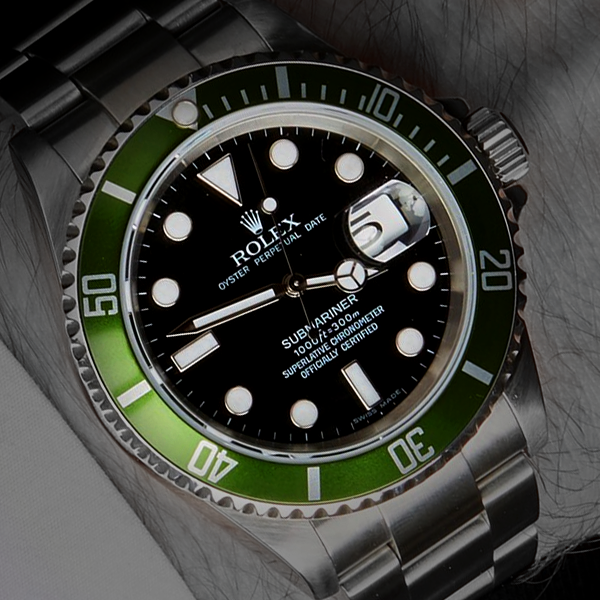 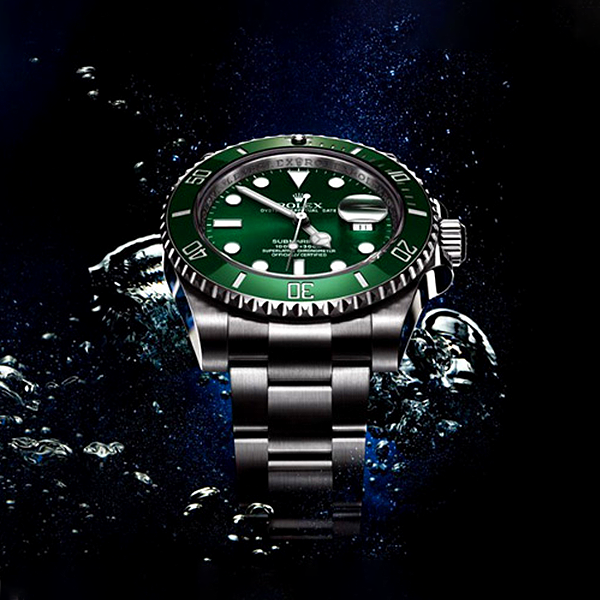 The Rolex Submariner Hulk had a heavy act to follow because vintage Rolex watches are renowned for their striking design features and robust construction. Every inch of a Rolex watch has been carefully thought through, from its look, right down to its features, which include a water-resistant casing, screw-down crown, and a top-notch self-winding movement.
‍
The conception of the Submariner Hulk began back in 1953. René-Paul Jeanneret, who was an experienced diver, was seeking a watch that could not only function underwater but still looked sophisticated and very desirable. He wanted a timepiece that could mimic a true divers watch, one that was robust enough to undertake the challenges of pressure while deep-sea diving. He approached Rolex founder Hans Wilsdorf, who instantly fell in love with the idea. What helped forge the idea into reality was that, at the time, Panerai, a maker of divers' watches, was a subsidiary of Rolex. This certainly gave Rolex a head start in the construction of this superb timepiece. Rolex even consulted the famous Jacques-Yves Cousteau and the build and extensive testing began.

We arrive at 1954 and behold, the emergence of an exquisite wristwatch with luminous hands, a rotating bezel, and a matte black dial. It was water-resistant up to 100 metres and had a superb automatic movement and top-notch Twinlock engineering. Later on that year, Rolex launched three Submariner models. Top of the pile was the Reference 6200, which boasted a self-winding movement and water resistance up to 200 metres. The whole collection was met with admiration and became very sought after. In the years that followed, further features and embellishments were applied. Unidirectional bezels made an appearance, the movement was upgraded, new materials were introduced and the name Submariner was placed on the dial.
‍
As if the creation of this collection was not enough, in 2010, a further model was launched called Reference 116610LV. Its knock-out design featured a magnificent green Cerachrom bezel, rugged case lugs, and a heftier bracelet. The watch became known as the Rolex Submariner Hulk. 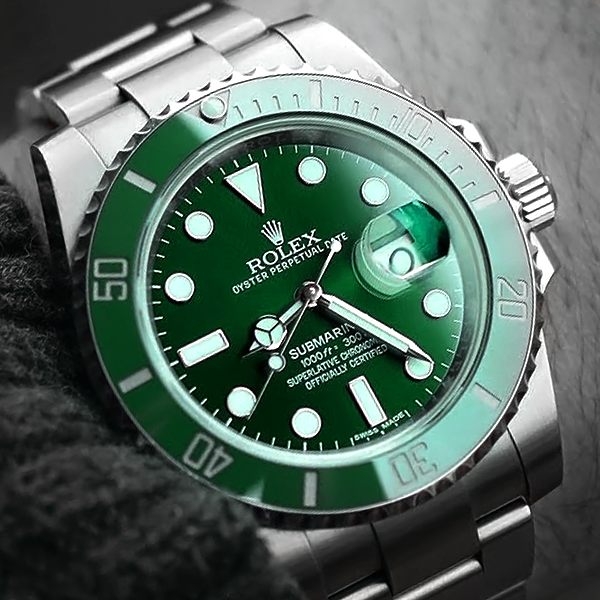 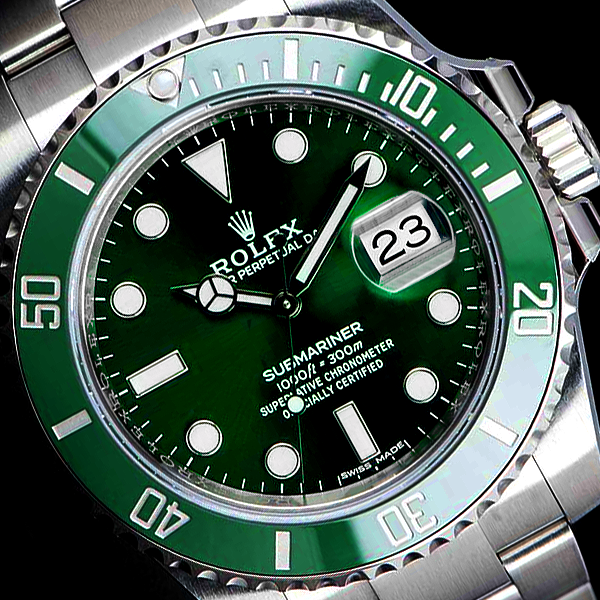 The watch is profoundly versatile and packs a punch with its stylish design - you simply want to drool over it! The green face is distinctive, as is the watchs robust dial and unidirectional bezel. The fluidity of the eye-catching colour that moves from bright green to dark green in the light is captivating. In addition, the delicate touch of 18ct gold applied on the luminescent hour markers adds a glint of class. The casing is constructed from highly durable 904L stainless steel, which is the same type of steel used in the aerospace industry, so no expense has been spared. To showcase the dial's features, theres an oyster bracelet with a Glidelock clasp that allows for easy adjustments without the need for tools. Theres a self-winding mechanical Rolex calibre 3135 movement that powers the watch with a hefty 48-hour power reserve. Finally, the Triplock waterproof system and crown guard allow this animal to dive to depths of up to 300 metres without losing any of its capabilities.

The Hulk has also recently been discontinued and a new reference has been born 126610LV going by the nickname Starbucks. The new face of the Green Rolex Submariner 126610LV carries one of the heaviest legacies in luxury watchmaking with impressive poise.

The previous generation of Submariners focused primarily on making the classic Sub profile more impactful, with a larger bezel, and an overall more apparent presence on the wrist without substantially changing the dimensions.

For the Submariner 126610LV and its stablemates, Rolex has responded to the trend over the past decade towards more refined, slimmer, vintage-inspired designs. As a result, the new 126610LVs case is more classically proportioned than its predecessor.


The Rolex Submariner Hulk is an ultra-cool masterpiece which oozes style, simply bursts with functionality and great investment potential. 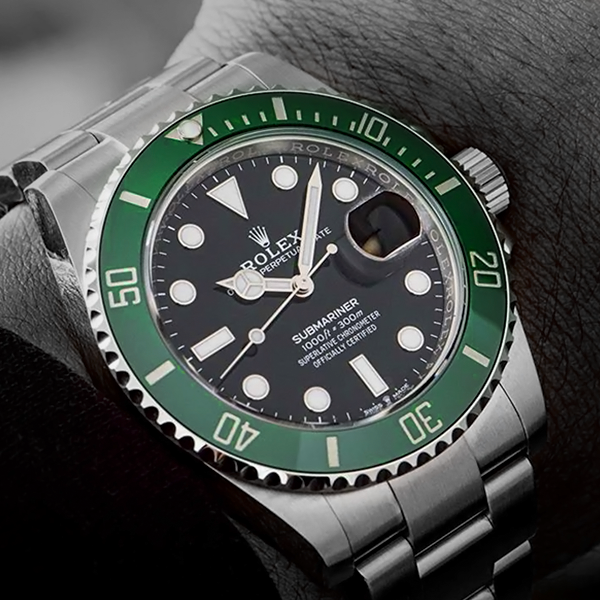 I hope you are all well and healthy.

Due to the re-emergence of coronavirus (COVID-19), we face another lockdown for at least one month, maybe longer. We must all therefore continue to work together and for each other, and adapt to different ways of working to meet and overcome this challenge. At Watchentre, our priority is the health, safety and well-being of our employees, customers, our partners and suppliers, and all the communities where we operate.

We will still be working in our offices and online for 6 days a week, so please do call or email us for any of your enquiries as we will be operating fully on a "Click and Collect" basis.

We will still continue to buy and sell watches and jewellery whilst also receiving and sending parcels via post and Fedex. We hope you and your families continue to stay healthy and safe during these uncertain and unprecedented times.