The luxury watch brand Audemars Piguet was founded in the Swiss mountain town of Le Brassus in the 19th century, when watch making was a growing profession in the picturesque Vallée de Joux region. From its humble beginnings in 1875, in a small workshop based on a farm, the brand has grown into a global empire, with an estimated net worth of £830 million today. It is responsible for some of the most iconic watches in history, most notably the Audemars Piguet Royal Oak collection, launched in 1972.

Read on to find out how Audemars Piguet watches gained their reputation as world-leading timepieces and why the Royal Oak, currently celebrating its 50th anniversary, has remained a firm favourite ever since.

How The Brand Became So Popular In the 19th century, when the mountain town of Le Brassus was a farming district, local residents needed another source of income during the winter. Watch making was a popular profession in Switzerland, so two local youths, Jules Louis Audemars and Edward Auguste Piguet, began learning the necessary skills.

Born in 1851 in Le Chenit, Audemars was tutored by his father in making watches. Initially, he started a small business creating watch movements for other manufacturers in the Vallée de Joux. Piguet, born in 1853 in the same district, also trained as a watchmaker. He became skilled in regulating complex watch movements.

Their skills in watch making led to them becoming business partners, founding Audemars Piguet & Cie in 1875. They built their first manufacturing centre, next to the workshop where they started out, in 1907, employing ten crafts people. Today, the brand's headquarters remain in the same location, near Geneva.

The workforce grew to 30 in the 1950s, but experienced its biggest growth in the 1970s, thanks to the launch of the iconic Audemars Piguet Royal Oak in 1972. Increased demand led to the workforce increasing to 100 people. The company's gamble in launching a luxury steel sports watch that cost more than other brands' gold watches paid off.

The Royal Oak was the first of a new class of luxury sports watches that were aesthetically pleasing, as well as technically advanced. The collection heralded the start of the modern era for the historic brand and has remained at the forefront of its designs for the past half-century.

The number of employees has grown to more than 2,000 today, reflecting the global popularity of Audemars Piguet. Several new buildings and manufacturing sites have been founded around Meyrin, Le Brassus and Le Locle. Why The Royal Oak Is A Firm Favourite

Golay called Genta and told him the Italian market wanted an "unprecedented steel watch" for all occasions, with the most beautiful finish ever seen. Legend has it Genta worked all night and by the following morning had invented the Royal Oak. He later described the design as the "masterpiece of his career".

The iconic steel watch was inspired by a traditional diver's helmet and characterised by a dial adorned with an exclusive blue petit tapisserie motif, an octagonal bezel with eight hexagonal gold screws and a visible water resistance gasket. 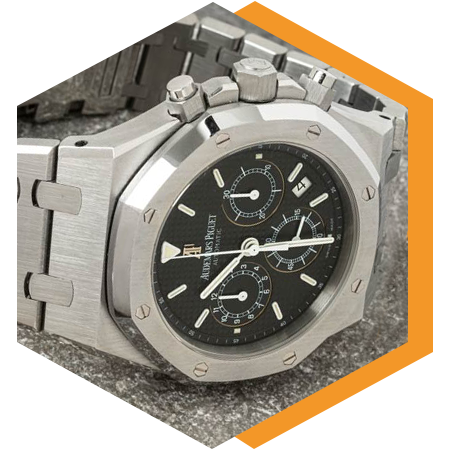 The slim watch measured only 7 mm, but had a comparatively large case diameter of 39 mm. It was completed by a complex integrated stainless steel bracelet.

The movement chosen was the self-winding Calibre 2121 - still used today for the Royal Oak Jumbo ref 15202 - based on the technically advanced Audemars Piguet Calibre 2120, but with an added date complication.

The name Royal Oak was based on the name of eight vessels commissioned by the British Royal Navy in recognition of the ancient hollowed oak tree, where King Charles II of England hid during the English Civil War in the 17th century.

The Royal Oak was launched at the 1972 Basel watch fair, priced £2,850. Made from steel, it was more expensive than the Rolex Submariner, or a gold Patek Philippe dress watch. The message from Audemars Piguet was bold, proving haute horlogerie could create a luxury watch without relying on precious metals. 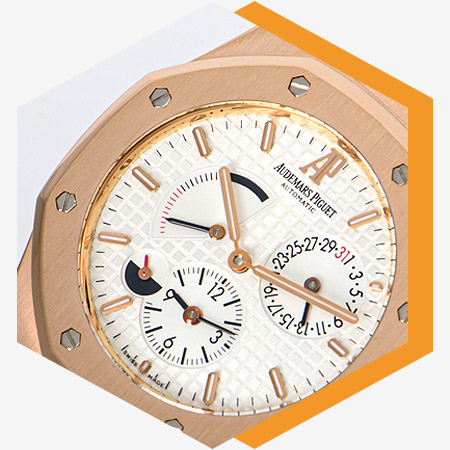 Trend-setters and collectors started buying the Royal Oak, thanks to its unique design. It soon became a huge success for Audemars Piguet. After the first 1,000 models were sold in slightly more than a year, it really took off.

The first Royal Oak A-series remains much sought after by collectors. It can be recognised by the "AP" initials being above the 6 o' clock, rather than at 12 o'clock, like subsequent series.

Audemars Piguet has introduced numerous variations of the Royal Oak since 1972, including the Royal Oak Perpetual Calendar Calibre 2120/2800 in 1981. It takes into account all calendar variations, including leap years and months, so it will not require any manual intervention until the year 2100.

The first Royal Oak Offshore was designed to mark the model's 20th anniversary. Intended to cater for sports enthusiasts and young people, the model was created by 22-year-old designer Emmanuel Gueit. The model had a deconstructed approach, revealing how it was built and its elements.

Its features include the visible, extra-large, black gasket on the bezel. The 42 mm case size was huge at the time, although it's the norm today. It created a ripple of excitement among collectors and earned the nickname, "The Beast".

On the 30th anniversary, the Royal Oak Concept was launched as an authentic “lab watch". Its unique combination of technical sophistication, ultimate performance and extreme resistance made it an icon in the world of luxury sports watches. The case was the first to use alacrite 602, a high-strength alloy from the aeronautical industry.

The 2010 Audemars Piguet Royal Oak Equation of Time combined a precision display of the lunar cycle, a perpetual calendar, the equation of time - displaying the difference between conventional time and "true" solar time - and sunrise and sunset times.

In 2012, to celebrate the 40th anniversary of the Royal Oak, Audemars Piguet released an updated ref 15202 that was closer to the original version. It resurrected the Petit Tapisserie dial pattern and placement of the "AP" initials at 6 o'clock.

To mark the 50th anniversary, the Audemars Piguet Royal Oak Jumbo Extra-Thin 39 mm ref 16202 model was released in January 2022. It introduced a new feature, the self-winding movement Calibre 7121, instead of using the Calibre 2121 movement launched with the original Royal Oak in 1972. 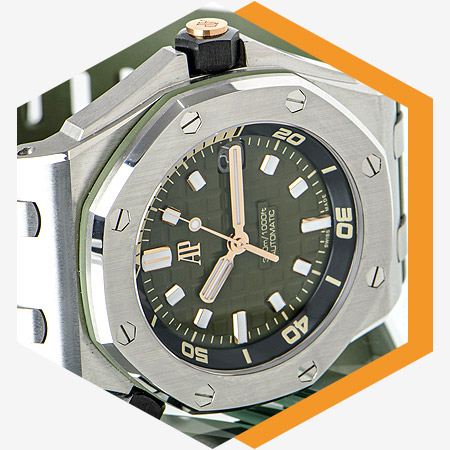 How Much Is A Royal Oak Worth Today?

The original Royal Oak cost around £2,850 when it was released in 1972, making it significantly costlier than its nearest rivals. However, for the discerning collector, the price wasn't a barrier, as the Royal Oak was at the top end of the luxury watch market. In addition, the prices have remained buoyant, making it a valuable investment. 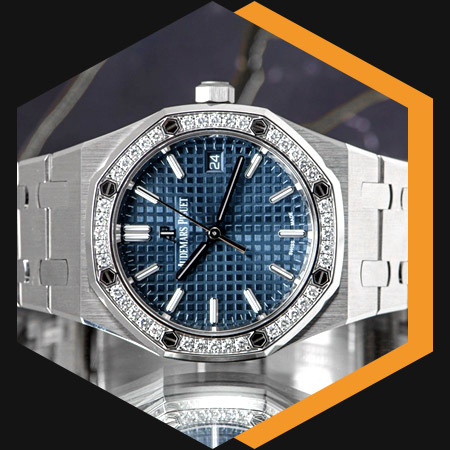 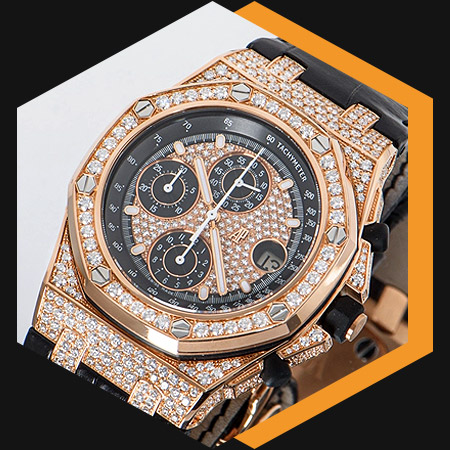 This is only slightly more expensive than a vintage A-serial Audemars Piguet Royal Oak 39 mm, dating from 1972, with a Certificate Of Authenticity, which is valued at £129,500 today.

Is The Royal Oak A Good Investment? 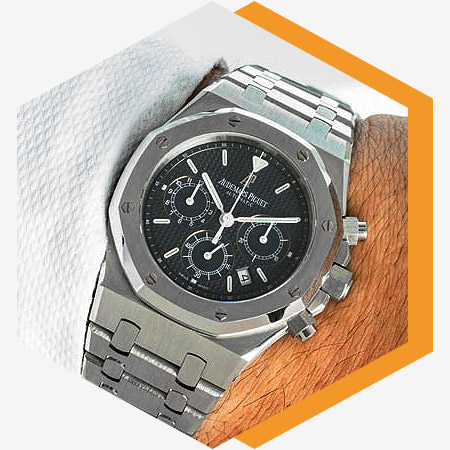 The Royal Oak today remains one of the best investments in luxury watches that you can make. You only have to consider how the first Royal Oak - retailing at £2,850 in 1972 - is now valued at £129,500 to realise how much this brand and model appreciates in value over time.

Over the years, vintage models are continuing to increase in price, while their quality and materials are unmatched. Publicity around Royal Oak watches has reached fever pitch today, due to it being the model's 50th anniversary, so prices have increased more than usual in recent months.

The most expensive Royal Oak watch ever sold was the watch designer Gerald Genta's own vintage Royal Oak, which sold for a record £1.74 million to a Swiss collector on 10th May 2022 at Sotheby’s auction in Geneva.

Q: How many Royal Oaks are made each year?

Q: How big was the original Royal Oak?

A: The original Royal Oak was a slim watch, measuring only 7 mm, in contrast to its comparatively large 39 mm case diameter.

Q: Who owns a Royal Oak?

A: American record executive, rapper and entrepreneur Jay-Z loved his £257,900 Audemars Piguet Royal Oak Concept Carbon GMT Tourbillon watch so much, he wrote a song about it - even managing to incorporate the brand's multi-syllable name into a rap song! Singer Justin Bieber reportedly bought himself one as a wedding gift, while US tennis legend Serena Williams is another proud owner.

Q: How many Royal Oaks were produced?

A: While production of Audemars Piguet Royal Oaks totalled 45,000 in 2021, the number is expected to increase to 50,000 in 2022 to match the increasing demand in the 50th anniversary year.

Browse our Audemars Piguet watches today to see which Royal Oak watches we currently have in stock.