History of the Patek Philippe Chronograph

History Of The Patek Philippe Chronograph

The legendary Patek Philippe Chronograph was unveiled in 1856 and became the precursor to the famous range of watches created by the brand during the next two centuries.

The model was launched to satisfy American collectors' demands for an inexpensive yet accurate pocket watch. Over the decades, the US market continued to shape the development of the chronograph, as its grand complications were highly sought-after by the nation's elite.

Today, the success story of the Patek Philippe Chronograph continues, with the latest three models being announced in October 2021. The highly-anticipated new references, the 5204, 5905 and 5930 models, have been welcomed by collectors, with the brand continuing its mission to create exciting new complications. 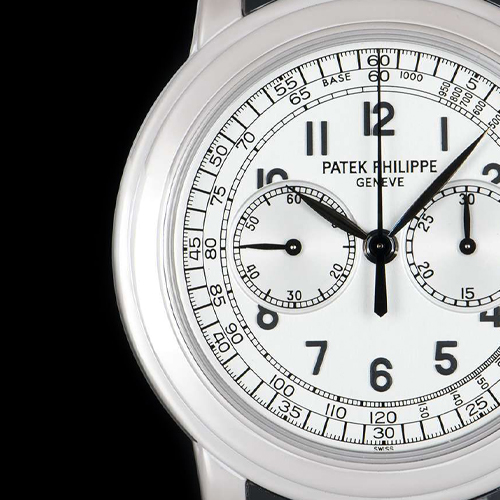 When Patek Philippe released its first chronograph, the brand was a relative newcomer in the famous Swiss watchmaking sector. The company was founded in Geneva in 1839 by Polish immigrants, Antoni Patek and Franciszek Czapek.

Both had served previously with the Polish military before moving to Switzerland, where they met. Patek traded in luxury engraved pocket watches, while Czapek trained as a watchmaker. Their combination of business acumen and watchmaking expertise ensured their fledgling company grew.

Their partnership dissolved in 1845 when Czapek decided to start his own watchmaking company. Patek was joined by a new business partner, French horologist Adrien Philippe, whose creative force led to many new innovations for Patek Philippe watches.

The chronograph came about as a result of Patek's fact-finding mission to America in 1854. He was keen to explore this growing luxury timepiece market and raise awareness of the Patek Philippe brand. He wrote numerous letters to the company HQ in Geneva with updates of his findings.

In one letter, he commented how Americans wanted "inexpensive watches" that would "determine the speed of their horses to an accuracy of one quarter of a second". In an age of horse-drawn transport and horse racing, this was an important consideration.

The observation struck a chord with the design team at Patek Philippe. They started work on the first chronograph, Reference 10 051, a classic pocket watch with three sub-dials and a jumping second hand.

The original design style, featuring discreet lines, shaped bridges and white enamel dials, stood the test of time. It didn't have a reset mechanism as yet and was returned to zero by using a key.

The Patek Philippe Chronograph was a success from the outset. Its development continued to be shaped by the US market for the next decade. During the late 19th century, there was a growing desire to add other complications to the chronograph function.

While the early chronograph timepieces were pocket watches, wristwatches became increasingly popular in the 1920s. In 1922, Patek Philippe received a special commission for a split-seconds chronograph on a bracelet. It was redesigned with a gold officer's style case in 1923 and became part of the regular collection.

In 1932, Patek Philippe was acquired by brothers Charles and Jean Stern, who had supplied the dials to the watchmaker for many years. They continued to develop complex watches and paired the chronograph with other complications. 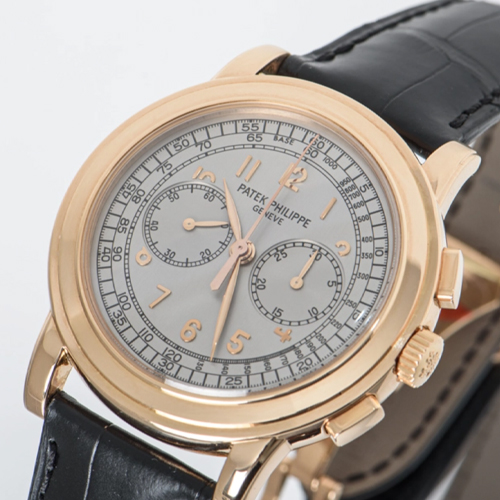 This led to the brand's legendary World Time mechanism, introduced in the Reference 1415 World Time Chronograph in 1939. It remains one of the most famous and sought-after historic watches today. In fact, the launch of this iconic Patek Philippe timepiece is regarded as a groundbreaking event by collectors.

The combination of the chronograph movement with a perpetual calendar, combined with the model's aesthetically well-balanced design, made it the icon of the Patek Philippe collection.

Development of the model continued throughout the 1940s, leading to a unique and very important platinum world time wristwatch in 1946. The model was fashioned in matt silver with platinum Arabic numerals, a 31 mm dial, a platinum Patek Philippe buckle and a revolving, hand-engraved, reeded bezel containing the names of 41 cities.

The Reference 1415 made international headlines in 2002, when it sold for £5.3 million, making it the most expensive wristwatch in the world at the time.

The next major milestone in the development of the Patek Philippe Chronograph was the Reference 2499, released in 1951. The moon phase chronograph was slightly larger than its predecessors at 37.8 mm, compared with the regular diameter of 37.5 mm.

There were four different series released between 1951 and 1985. Before the release of the first model, collectors believed it wasn't possible to "improve on perfection", but the Reference 2499 proved them wrong.

Musician Eric Clapton owned a rare platinum version of Reference 2499. It was one of only two known models, the other being owned by Philippe Stern. Clapton auctioned it at Christie's in 2012, when it sold for $3.5 million. Production ended in 1985, elevating the model to cult status. 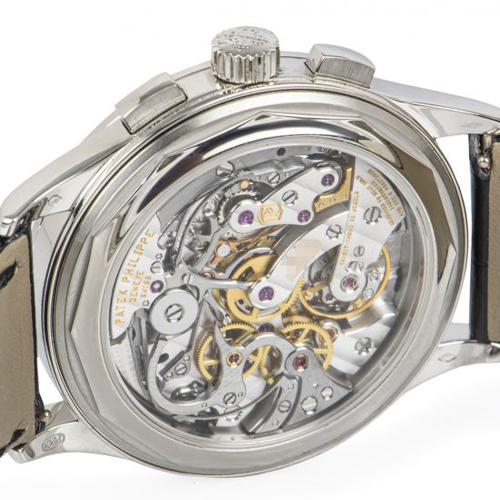 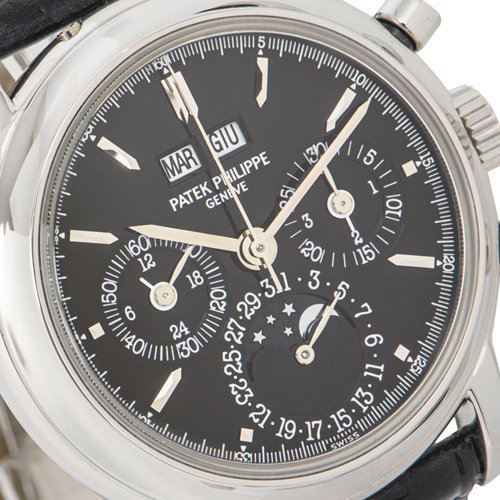 The Patek Philippe Reference 3970, released in 1986, replaced the Reference 2499 as the brand's flagship perpetual calendar chronograph. It boasted a Patek Philippe finished Lemania calibre instead of its predecessor's Valjoux caliber.

It remained in production for almost 20 years and became the ultimate "bargain" of the brand's high complication watches for many collectors. Interest in this model is growing in popularity, as today's astute buyers recognise it as a benchmark chronograph.

Watches in the second series of Ref 3970 feature rectangular baton numbers and leaf hands. They were made with a solid back and were seldom supplied with a second display back.

The yellow gold Patek Philipp Chronograph 3970EJ is an exceptional example of the perpetual calendar chronograph. It is highly coveted and collectable today, as it's considered by many collectors to be the pinnacle of the brand's watchmaking and design prowess.

It's hard to believe that its predecessor, the Ref 2499, manufactured in 1986, can be sold for more than £370,000, while a pre-owned Patek Philippe Ref 3970 Grande Complication can be picked up for the comparatively reasonable price of £80,000.

The Ref 5970, launched in 2004 and featuring a 40 mm case, was released in a choice of yellow gold, rose gold, white gold or platinum. The model was part of the Patek Philippe collection until 2009, while a diamond version continued until 2010.

The brand had also released a simpler chronograph version, the Ref 5070, which used the same Nouvelle Lemania 27-70 movement. There was also a model featuring a split-seconds chronograph perpetual calendar, the Ref 5004, with the same movement. They were both part of the collection until 2009 and 2011 respectively. 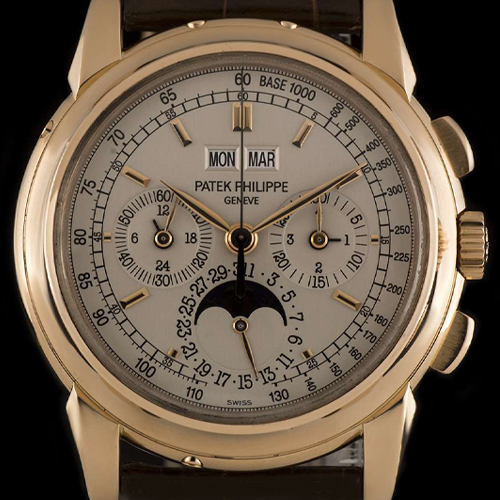 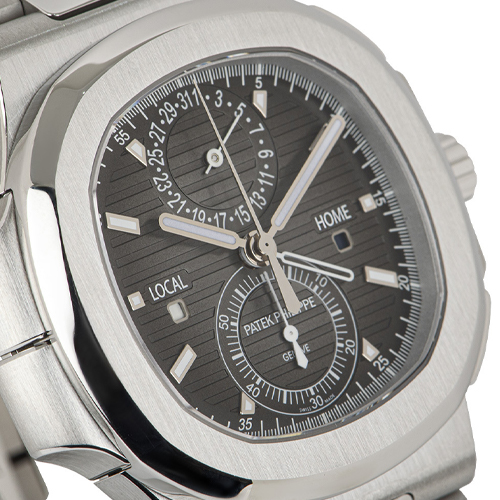 Patek Philippe launched the Ref 5170 in platinum in 2017. The all-new Ref 5170P in platinum had a 39.4 mm case, with a stunning blue sunburst dial. Powered by the manually wound CH 29-535 PS movement, it has six patented innovations. The functions include a central chronograph hand and an instantaneous 30-minute counter.

The brand also created two self-winding flyback chronographs with an annual calendar, the Ref 5960/01 in white gold and the Ref 5960/1 in stainless steel.

The Ref 5960/1, a self-winding flyback chronograph with an annual calendar, boasts a 40.5 mm stainless steel case and a white dial with contrasting red and black details.

Modern Patek Philippe chronographs are created in accordance with the new quality criteria, the Patek Philippe Seal. Introduced in 2009, the standards replaced the Geneva Seal to include a more extensive set of criteria covering the whole watch, rather than just the movement.

Buying a pre-owned or vintage watch by Patek Philippe is an investment for the future. The Patek Philippe Chronographs sold at Watch Centre are guaranteed authentic.

Choose from our large range of vintage, pre-owned, used and unworn Patek Philippe watches, which come with a one-year guarantee. We stay on top of current trends and prices and are recognised as offering some of the best prices on the luxury watch market.